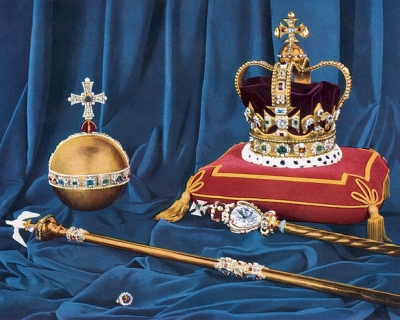 Peerage: The group of individuals who hold titles of royalty or nobility.

As we continue to expand our family history research, going further back in time, it is inevitable that we will find an individual who was in the peerage of a country.  However, the minute you tie into the peerage/royalty of Europe, you become related to almost everyone who held a title.  Why?  Because of intermarriage between the royalty.  For political and land acquisition purposes, marriages were arranged.  It is not uncommon for the marriages to even be between children, and sometimes marriages were arranged at time of birth.

We find references to titles in ancient documents.  There are kings and queens in the Bible.  There were emperors in China and pharaohs in Egypt.

Where did titles come from?  How did people become kings and queens, dukes and earls, etc.?

Let us turn the clock back thousands of years to a land far away. We are in a valley, lined with caves and in these caves, live families. They kill animals with rocks and clubs and gather plants in the valley to eat.  In one cave lives Ogg.  One day Ogg is rubbing two sticks together because he likes the scraping sound they make.  Suddenly he notices as he rubs the sticks, they get hot.  He keeps rubbing them together and they catch fire.  Ogg discovers fire.  He shares it with his family and they recognize that he is the smartest man in the cave and they ask him to be their leader.  They give him the title of Chief Ogg of the Flame.  The family grows and becomes the Fire Clan.

In another valley close by, lives Blodo, a very strong man skilled with a club.  By virtue of his strength (and because everyone fears him), he assumes leadership of a group of caves and they call him Chief Blodo the Fearless.  The families grow and eventually become the Clan of Warriors.

Back to the Fire Clan.  Ogg’s sister Waba is picking grass and some of the seed falls onto the ground and sprouts.  Waba sees that you can plant seed in a plot and get the same result without traveling great distances finding plants.  Waba discovers farming.  Ogg’s brother Glogg finds that if you put Waba’s grain into water and let it set, it ferments.  Glogg discovers beer!

So Ogg’s family decides that they are smarter and better leaders than others in the Fire Clan and that they and their descendants should always be the leaders and the elite of the clan.  Now we have aristocracy!

The concepts are simply human nature.  Aristocracy and nobility grow from people who may be smarter or stronger and possess the ability to conquer or govern others.

In royalty and nobility, A King outranks a Duke , who in turn outranks a Marquess, Earl, Count, or Viscount.  Barons, Lords of Manors and Knights are not nobility.

When we find a family member with a title, how do we enter it in our genealogy program?

Titles are facts of importance.  They help define the individual and help in building family relationships.

Genealogy programs have a variety of fields to include information beyond simply the person’s name and dates and places of important events.  Fields such as Nickname, Prefix and Suffix fields exist to expand on the name.  Other fields such as Dynasty, Clan, House exist to identify family identities.  A program may have dozens of special fields.

Which field in our genealogy program should be used for the Title?  If the program has a “Prefix” field, the Prefix field is used for royalty.  The following applies:

All ranks below are entered as Lord.or Lady. in the prefix field.  These ranks include: Earl, Thane, Count, Countess, Viscount, Viscountess, Marquess, Marchioness, Baron, and Baroness.  A Knight is entered as Sir.  His wife is entered as Lady. unless she possesses as higher ranked title.

Why did I put a period behind each title including Lord and Lady? So the title will not be confused as being part of the name.  Yes, there are people whose first name is King or Prince or even Lady.

Where do you enter the full title?  Most programs have many fields available for use such as:  Title of Nobility, Title(Nobility), Noble Rank, Noble Title, Peerage, etc.  Use the one that you feel best describes the individuals.  I use Title of Nobility.  For Archbishops, Nuns, Abbess, etc.  I use Title (Religion).  For Knights I use Title in the Other Section

No Prefix field in the program?  Use the Suffix field if available, in this case use the full title – King of Spain, Queen of Aragon, Prince of England, Duke of Bedford, Count of Autun, etc.

How do you enter titles for Political/Military.

I use the Prefix:  President, Governor, Sheriff, Col. Lt, Maj, General, Dr., Hon., Rev. etc. For full title, I use the Title field in the other section.

Most titles are not present at birth.  Men/women are not usually born and Kings and Queens, Dukes, Earls, etc.  The titles are gained when a predecessor dies, at time of marriage, for a heroic act, by marriage, by conquest, etc.  Many titled persons have held multiple titles in their life.

Here is an example from my own lineage.  My 22nd Great-Grandfather was Robert the Bruce, King of Scotland, born in 1274.

This is how he is entered in my genealogy Program:

In the Other Events section of his individual page, the following is entered:

Title of Nobility:  King of the Scots

Title of Nobility:  Earl of Carrick

I would think that my readers are English speakers and the genealogy program used is English language based.  The recommendations in this article are based on English being the user's language.

Do we enter a title as we find it on a source document?  We can. The problem is that since our program is in English, most readers will not understand the title if in a foreign language.  A German Count is called a “Graf.”  If we enter an individual as Graf Johann of Berlin, will people understand that Graf is his title, or will they think his first name is Graf?  Even though there is no established rule, it makes sense to convert a foreign title to its English equivalent unless the individual is famous and has been known historically by the foreign title.  We probably should not change Czar Nicholas to King Nicholas, or Julius Caesar to Julius the King.

Titles and their rank are almost consistent throughout Europe.  However, there are some titles that do not directly convert.  For Instance, some countries have titles such as Crown Prince (heir to throne).  England doesn’t use that designation.  England’s heir is the Prince or Princess of Wales instead.  Sometimes a title can have more than one English equivalent.  This is usually because of an internal family relationship.  In Scotland, a Thane’s equivalent is based on how much land he holds.  He is usually a Marquess, but he can be equivalent to an Earl or a Baron.  These are unusual circumstances.  Most titles can be directly converted to the English equivalent.  Another inconsistency is the Title of Earl.  This title does not have a direct tie to most countries.  It is a carry-over from Anglo-Saxon times.  In most countries an Earl is equivalent to a Count.

Consorts:  If a female marries a royal male, she assumes the female equivalent of the husband’s title with a certain provision.  These following scenarios illustrate royal marriages.

What is a Consort?  Anyone who marries a person with a royal title is a consort unless that person holds the equivalent title on his/her own.  In the first instance, if Isabel and Robert divorce, she is still a Queen, the Queen of Sicily.   In the second instance if Ruth and Barney divorce, she is no longer a queen.  She goes back to being Lady Ruth of Berwick.

What is a Morganatic Marriage?  (Great Britain only) This is sometimes called a left-handed marriage.  It is the marriage between people of unequal social rank, which in the context of royalty prevents the passage of the regent’s titles and privileges to the spouse and children born of the marriage (Royal Marriages Act 1772). The children are legitimate but cannot take the title of the reigning parent.  However, this does not apply to Queen Elizabeth and Prince Philip because she wasn’t queen at time of marriage.  She was a princess, he was a prince, therefore of equal rank.

TITLES IN THE BRITISH ISLES

I have included the titles for Emperor and Empress, even though they have not been used since medieval times.  Why?  If you find Charlemagne and descendants holding the title in the genealogy of that country, the title will be in the language of that country and you may desire to translate it into English.  I have also left it in Russia, because the Czar was the equivalent of Emperor.

The following charts show titles for several European countries and the English equivalent.

TITLES BY LANGUAGE IN EUROPEAN COUNTRIES