The Celts - Who were They? 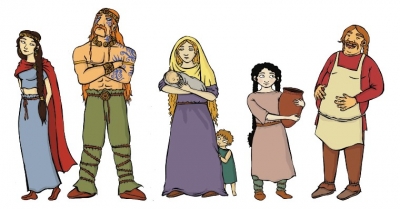 The Celts were a collection of tribes with origins in central Europe that shared a similar language, religious beliefs, traditions and culture. It’s believed that the Celtic culture started to evolve as early as 1200 B.C. The Celts spread throughout western Europe—including Britain, Ireland, France and Spain—via migration. Their legacy remains most prominent in Ireland and Great Britain, where traces of their language and culture are still prominent today.

The existence of the Celts was first documented in the seventh or eighth century B.C. The Roman Empire, which ruled much of southern Europe at that time, referred to the Celts as “Galli,” meaning barbarians.

However, the Celts (pronounced with a hard “c” or “k” sound) were anything but barbarians, and many aspects of their culture and language have survived through the centuries.

By the third century B.C., the Celts controlled much of the European continent north of the Alps mountain range, including present-day Ireland and Great Britain.

It is these islands off Europe’s western coast in which Celtic culture was allowed to survive and thrive, as the Roman Empire expanded on the European continent. Beginning with the reign of Julius Caesar in the first century B.C., the Romans launched a military campaign against the Celts, killing them by the thousands and destroying their culture in much of mainland Europe.

Caesar’s Roman armies attempted an invasion of Britain at this time, but were unsuccessful, and thus the Celtic people established a homeland there. As a result, many of their cultural traditions remain evident in present-day Ireland, Scotland and Wales, even now.

Several tribes made up the larger population of the Celtic people. Indeed, the Gaels, Gauls, Britons, Irish and Galatians were all Celtic tribes.

The Galatians occupied much of the Asturias region of what is now northern Spain, and they successfully fought off attempted invasions by both the Romans and the Moors, the latter ruling much of present-day southern Spain.

Evidence of Galatian tradition remains in the region today. Descendants of the Galatians still participate in ancient outdoor dances, accompanied by bagpipes, an instrument that is often associated with more well-known Celtic regions such as Scotland and Ireland.

In addition, a Celtic symbol called the “Cruz de la Victoria” (similar to a Celtic cross) adorns the regional flag.

The Galatians also settled in nearby Galicia, a region on the northwest coast of Spain.

Britons and Gauls settled in the northwestern corner of present-day France, the region known today as Brittany. Celtic tradition survived in the region as it was geographically isolated from the rest of France, and many festivals and events can trace their origins to Celtic times.

Many of the French “Bretons” also wear traditional Celtic hats called coiffes (which means “hats of lace”), and roughly one-quarter of the region’s residents speak Breton, a Celtic language similar to Welsh.

Although Caesar’s invasion of Britain was unsuccessful, the Romans eventually mounted a successful attack against the Britons following Caesar’s murder in the first century A.D. This incursion effectively pushed the Britons on the island west to Wales and Cornwall and north to Scotland.

In fact, the Romans built Hadrian’s Wall (remnants of which still stand today) near what is now the border between England and Scotland, in 120 A.D. The wall was designed to protect the conquering Roman settlers from the Celts who had fled north.

In Wales, called Cymru by the Celts, the native tongue—Welsh—is a Celtic language, and it is still widely spoken in the region. Similarly, in Cornwall (the westernmost county in England, and near Wales), many residents still speak Cornish, which is similar to Welsh and Breton.

And, in Scotland, the Celtic language Scots Gaelic is still spoken, although by a minority, and the local affiliate of the British Broadcasting Corporation (BBC) is known as BBC Alba, the Celtic name for the region.

Of course, the bagpipes, the musical instrument for which Scotland is arguably best known, can also trace their origin to Celtic times.

Neither the Romans nor the Anglo-Saxons, who took what is now England from the Romans in the fifth century A.D., were able to successfully invade Ireland. This enabled the Celtic tribes that had settled there—namely, the Gaels and the Irish—to survive, and allowed their culture to flourish.

When Christianity arrived in Ireland with St. Patrick in 432 A.D., many Celtic traditions were incorporated into the “new” religion. In fact, it’s said by some historians that Catholicism was able to take over as the dominant religion on the island following the mass killing of Druids, the religious leaders of the Gaels.

The Celtic cross represents the region’s unique take on the Catholic cross. In addition, many Celtic folklore stories, such as the legend of Cu Chulainn, are still told in Ireland.

Like Welsh, the Irish language of Gaelic is a Celtic language. Gaelic largely disappeared in the 19th century, when the English colonized Ireland, but the language is still spoken in the western part of the country.

Across Europe, the Celts have been credited with many artistic innovations, including intricate stone carving and fine metalworking.

As a result, elaborate Celtic designs in artifacts crafted from gold, silver and precious gemstones are a major part of museum collections throughout Europe and North America.